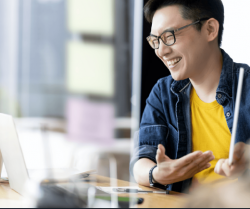 The primary study objective was to measure the bioavailability of Xtenergy vs. immediate release caffeine with the secondary objective of measuring effects of Xtenergy on nootropic benefits, such as alertness and mood.

IR caffeine resulted in a prompt increase in absorption that peaked within the first hour but was followed by a sharp decline immediately thereafter up until 24 hrs. However, Xtenergy peaked around four hours, a ~325% increase vs. IR caffeine. Further, it remained in the blood ~21% longer than IR caffeine. Xtenergy was also associated with feelings of being more alert, less tired, better overall mood, less jittery and less tense vs. IR caffeine.

“Since the nature of the caffeine formulation can directly influence the rate and extent of absorption of caffeine and its subsequent physiological effects, OmniActive formulated Xtenergy to release caffeine in an extended, sustained format over a period of 6-8 hours,” explained Deshanie Rai, VP, Global Scientific & Regulatory Affairs for OmniActive. “This allows Xtenergy to deliver on key nootropic benefits that consumers want through the day.”

Xtenergy is a natural, sustained-release caffeine from green coffee bean developed using a solvent-free process and the spray melt technology that involves coating caffeine granules. This makes Xtenergy suitable for use in tablets, powders, stick packs, and capsules.

“Not all energy is the same and the needs of the market are evolving. Xtenergy is a unique, branded solution that delivers benefits in multiple categories, from consumers who want sustained energy and nootropic benefits to power through the day to more niche segments, like esports and gaming, where the competitive advantage of clean energy is key,” said Kimberly Smith, CMO of OmniActive. “The health benefits of Xtenergy along with this new piece of science will help our customers further differentiate and standout in an increasingly crowded marketplace.”

Established in 2005, OmniActive seeks to improve lives by enhancing nutrition and wellness through science and innovation. OmniActive’s extensive portfolio consists of natural, scientifically validated, sustainable and IP-protected ingredients for global customers in dietary supplements and functional foods and beverages. Some of the Company’s leading brands include Lutemax®, Capsimax®, CurcuWIN®, Gingever™, Xtenergy® and OmniXan™. OmniActive partners with customers through its sales and distribution networks in key markets worldwide, supported by three global R&D centers and best-in-class production facilities throughout India. The Company has offices in Mumbai, India and Morristown, New Jersey. For more information consult www.omniactives.com.